Structure, 1956. A geometric mobile structure in brass, with motor, 338 x 115 cm, displayed in the alcove at the foot of the central stairway, in the museum’s entrance hall (atrium).

Francis Pellerin’s only mobile work was created for the reopening of the museum after the Second World War. It is a work of kinetic art, a genre subsequently developed by the Groupe de Recherche d’Art Visuel (GRAV, research group for visual art). 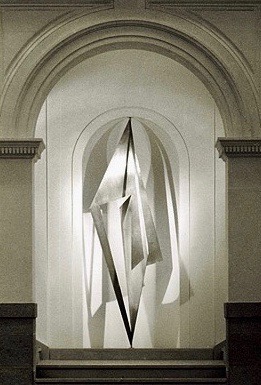 On the upper floor, before you reach the art construit (Constructed Art) room, you can see La Joie, a sculpture in wood sourced from the gardens of the Villa Medici and completed by Pellerin in 1947 (42 x 60 x 43 cm). Suzanne Pellerin donated the work to the museum. She described it as being representative of the sculptor’s craft and his transition to abstraction during his residency in Rome.

The philosopher Monique Merly expanded on this:

“[…] the light falling on his work, brought out the very form he was seeking better than he himself could. […] the full skill of the artist was called upon, and yet did not suffice. It nourished and served the work […] that was in the process of creating itself. The ‘hoped-for unhoped-for’ work.” 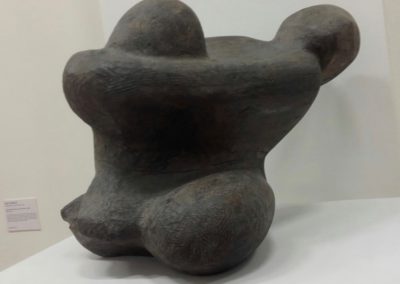 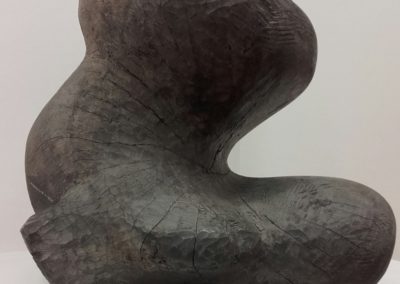 The room dedicated to Constructed Art, the Groupe Mesure and the Salon des Réalités Nouvelles displays three other works donated by Suzanne Pellerin: 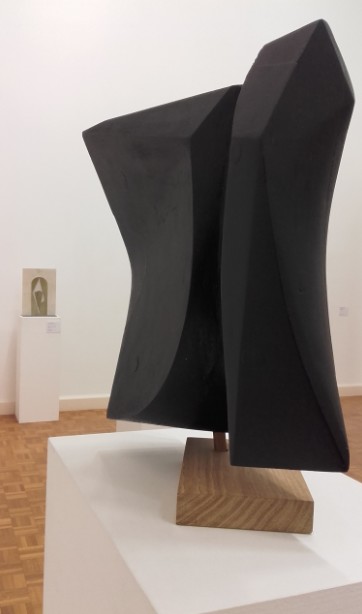 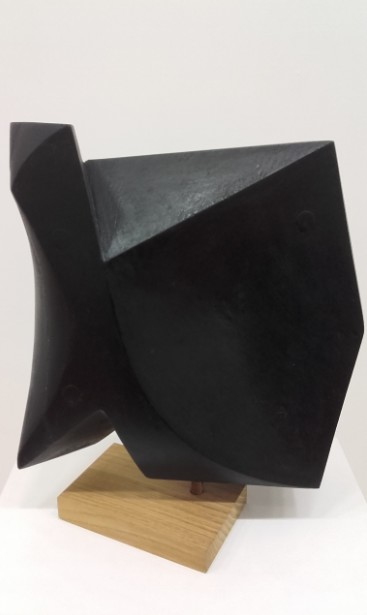 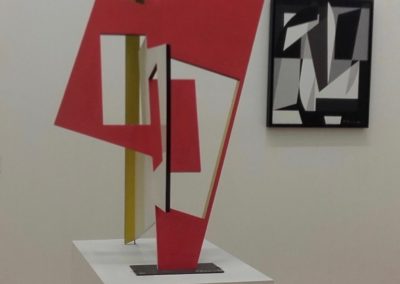 This canvas is one of a series of versions of Grand Vaisseau, which dates from the early 1950s. The title pays tribute to the writings of Kazimir Malevich.

A geometric oil on canvas, 1957, 130 x 89 cm. Acquired by the Société des Amis du Musée, there are close parallels between this work and the polychrome structure déployée mentioned above. 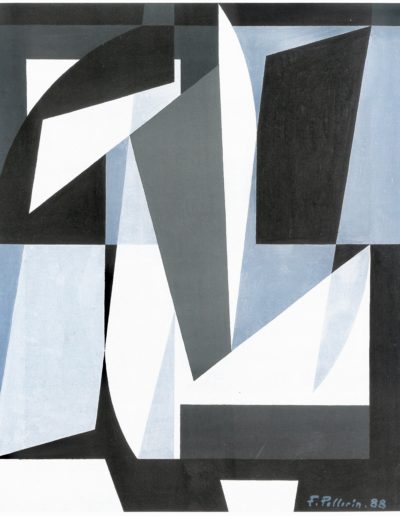 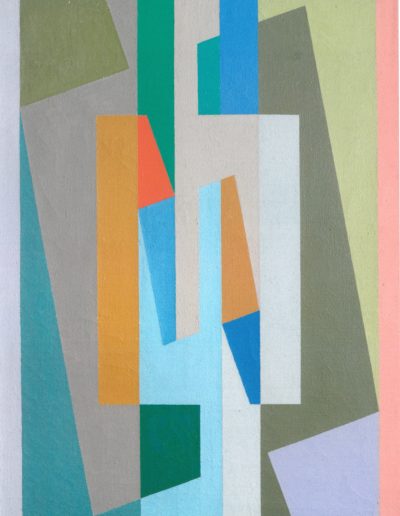 The viewer is offered a kinetic perception of this work, an example of Constructed Art, as they move around it. Sadly, its readability has been impaired by the positioning of a reception desk directly in front of it. In an article in Ouest-France, Laurence Imbernon – curator of the 2005 Francis Pellerin retrospective at the Musée des Beaux-Arts de Rennes – expressed her regret at the lack of respect for a significant work of art.

Film footage from 1964, broadcast on FR3, held by the Institut National de l’Audiovisuel (INA, French national audiovisual institute), shows Francis Pellerin in front of this work, in conversation with the interviewer. 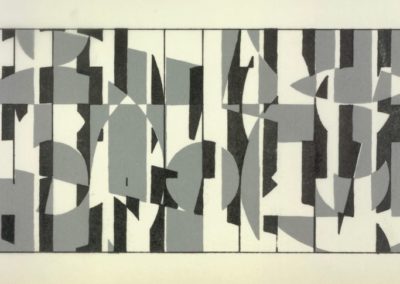 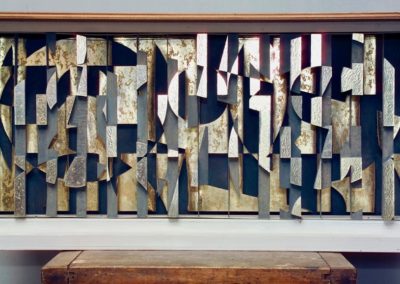 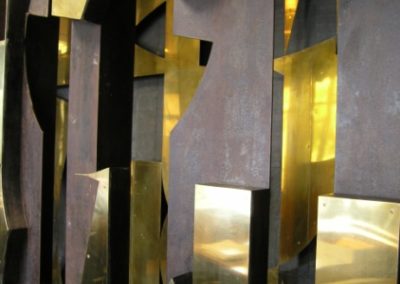 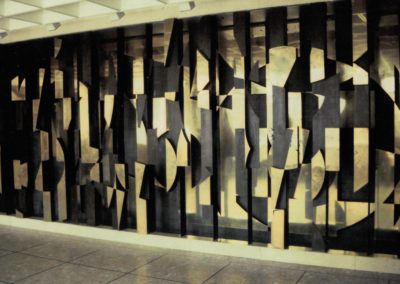 Arpèges, 1963. A geometric bas-relief in white stone set above the entrance porch of the school which is situated to the left of the Parc du Thabor’s south gate.

Speaking of this work in 2005, Suzanne Pellerin was quoted in Le Rennais:

“For the first time, Francis could apply the idea of an extendable form that could be compressed or opened out on various scales – a concept that would achieve its apotheosis twenty years later with the large granite and schist mural at the Le Triangle cultural centre in the Zup Sud area of Rennes.” 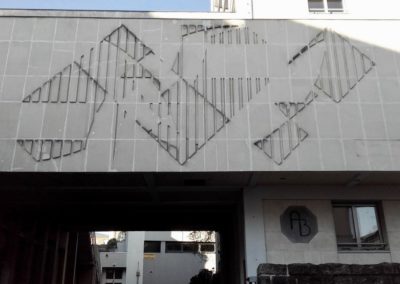 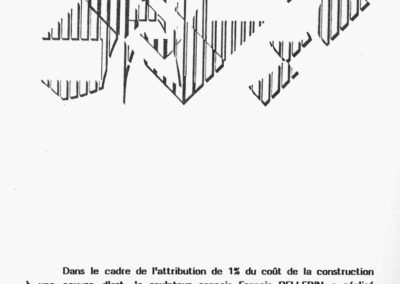 Works by Francis Pellerin of differing styles, completed between 1960 and 1962, can be seen at Rennes University’s Law Faculty, which is located between the north gate of the Parc du Thabor and rue Jean Guéhenno:

To return to the centre of Rennes there is a bus stop nearby, across the road from the university canteen. The Jules Ferry metro station (line B) is due to open early 2022. 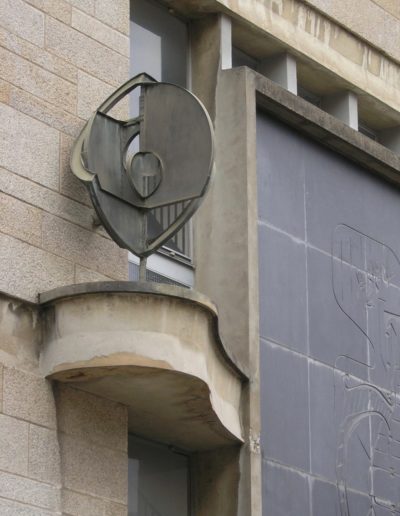 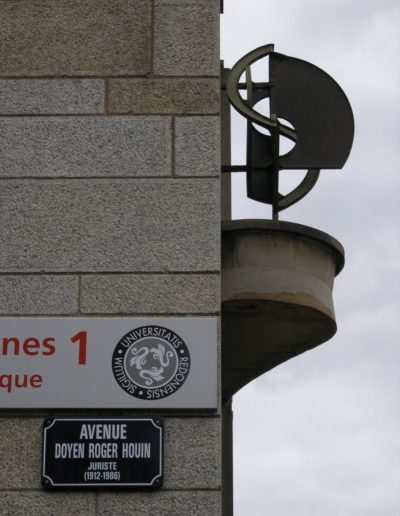 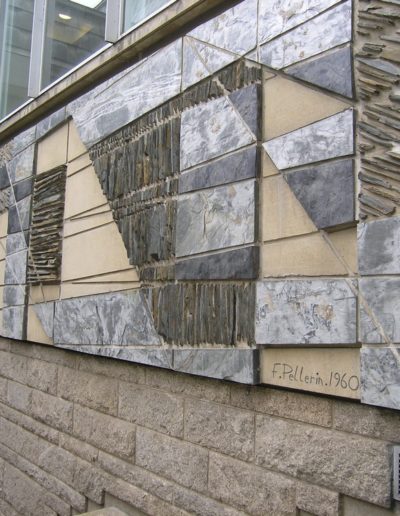 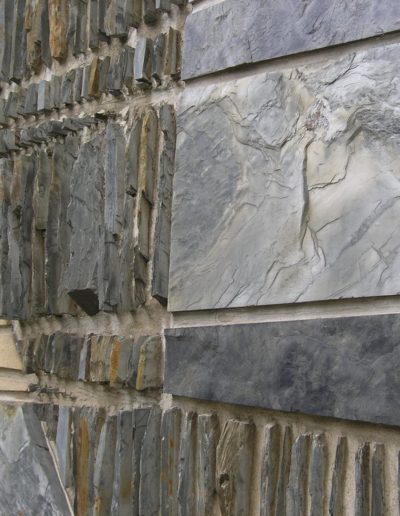 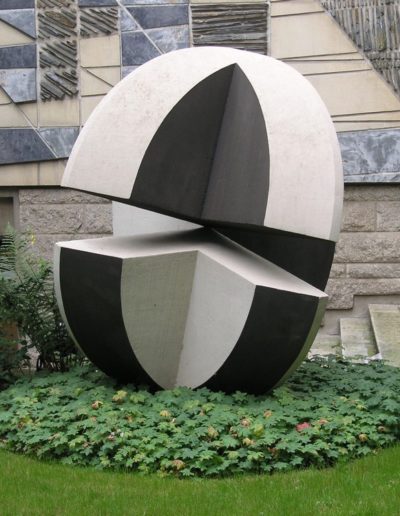 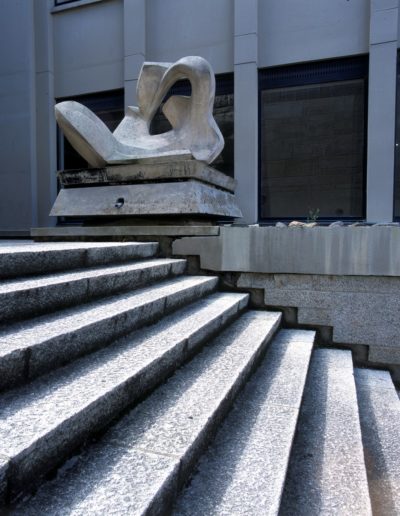 Those who are returning to Rennes railway station can visit the CPAM building, located opposite the Les Champs Libres cultural centre (metro Charles de Gaulle) and some 100 metres from the station. In the building’s foyer you can see the mural structure created there in 1984. An openwork panel made of idigbo, a tropical hardwood, it measures 10.44 x 2.90 m. The vertical elements are 15 cm in width and 4 cm in depth. The viewer’s reading of the rhythmic geometric forms changes according to where they are standing.

Please note: Work being carried out on the ground floor of the building mean that the openwork panel cannot be seen at the present time. This is likely to remain the case until the end of 2022. 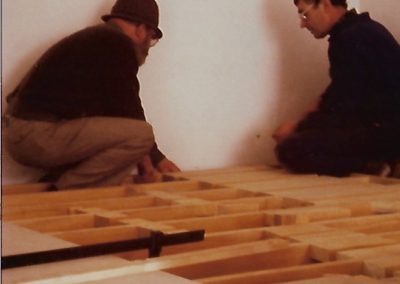 Francis Pellerin and René Besnard during the making of the openwork panel, 1984 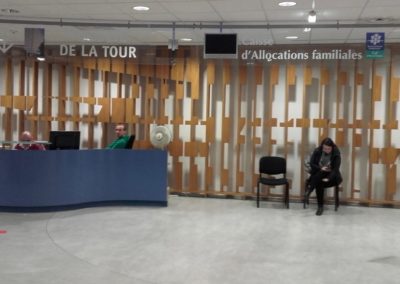 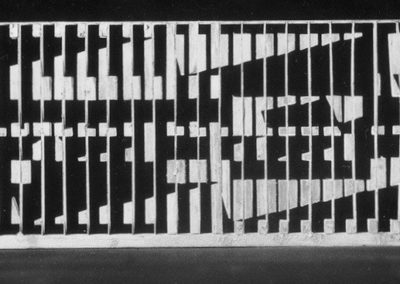