“Sculpture is an art of the open air. Daylight, sunlight is necessary to it…”

At the present time, monumental sculptures by Francis Pellerin are listed at over 80 sites, including 43 and 16 in the French départements of Ille-et-Vilaine and Morbihan respectively, and others beyond Brittany, in Caen, Laval, Bordeaux and Decazeville. Many of these works were made possible by a decision taken after the Second World War, in 1951, to devote 1% of the total cost of the construction of school and university buildings to their decorative aspects.

During his time in Rome, at the Villa Medici (1946-1948), Pellerin held an ongoing creative exchange with architect fellows in residence, including Guillaume Gillet, Raymond Gleize and Jean Dubuisson. During the period of reconstruction following the war, he was approached by, among others, Louis Arretche, Henry Auffret, Louis Chouinard and Jean Lemercier. He also maintained an “artistic friendship” with the architects Yves Guillou and Yves Perrin.

Armel Pellerin, the sculptor’s son and himself an architect, recalls:

“His studio was a laboratory of forms where he worked on drawings, sketches and maquettes before presenting them to the architects… Once a design was selected, he was able to develop it, scale it, and defend it with conviction… It was the quality and reliability of his commitment to projects that were key to securing the loyalty of architects.”

Pellerin produced monumental sculptures in various materials. He used metal for Anascope at the Inspection Académique, Forme à Rêver at the Établissement Français du Sang and for works held by the Musée des Beaux-Arts, all in Rennes. Wood was his material of choice for works created for the Saint-Malo fish market, Caudan church (Morbihan), the church of Saint Yves in Rennes and for the openwork panel in the CPAM building, also in Rennes. He used stone for mural decorations, for example those on the façades of the Saint-Malo casino and the Le Triangle cultural centre in Rennes, and for bas-reliefs, such as those that can be seen at the former Caisse d’Épargne in Caen. Works similar in character to the sculpture in the round at the secondary school in Villejean, Rennes (Collège Rosa Parks, formerly Malifeu) – a 3-metre-high, spherical, polychromatic form – were also made of stone. Other works, meanwhile, were of a scale that required an arrangement of blocks of granite, for example those commissioned for the École de Chimie and Lycée Pierre Mendès France, both in Rennes.

Pellerin’s works also included tapestries, including one for the secondary school in Retiers (Ille-et-Vilaine).

The philosopher Monique Merly observed that for Francis Pellerin :

The architectural context of a monumental sculpture was an inescapable part of its creation. It became his opportunity to rethink what constituted the scale of a work, not just the proportions – even if these were absolutely correct – but what determined its readability and therefore its truth from whichever angle it is viewed.

In her article The abstraction of Francis Pellerin: a geometric sensitivity, art historian Domitille d’Orgeval explains :

For [Francis Pellerin], only this leaning towards the abstract, with its repertoire of rational forms, its constructive universal and humanist dimension, was worthy of consideration if one hoped to establish a dialogue between the arts and architecture. Thus, with subtle intelligence, Francis Pellerin asserted his mastery of geometric order whether through painting or sculpture, making his mark, from the 1950s to the end of the 1970s, as a major initiator of modernity in Brittany.

A brief overview of the steps required in the commissioning of a monumental sculpture under the 1% artistique scheme :

The paperwork relating to Pellerin’s monumental sculpture commissions (which can be viewed at the Archives de Rennes) shows that it was usual for two to three years to elapse between the initial written documentation about a project and its final completion. In some cases, as for the work created for the École de Chimie in Rennes, it took over six years! 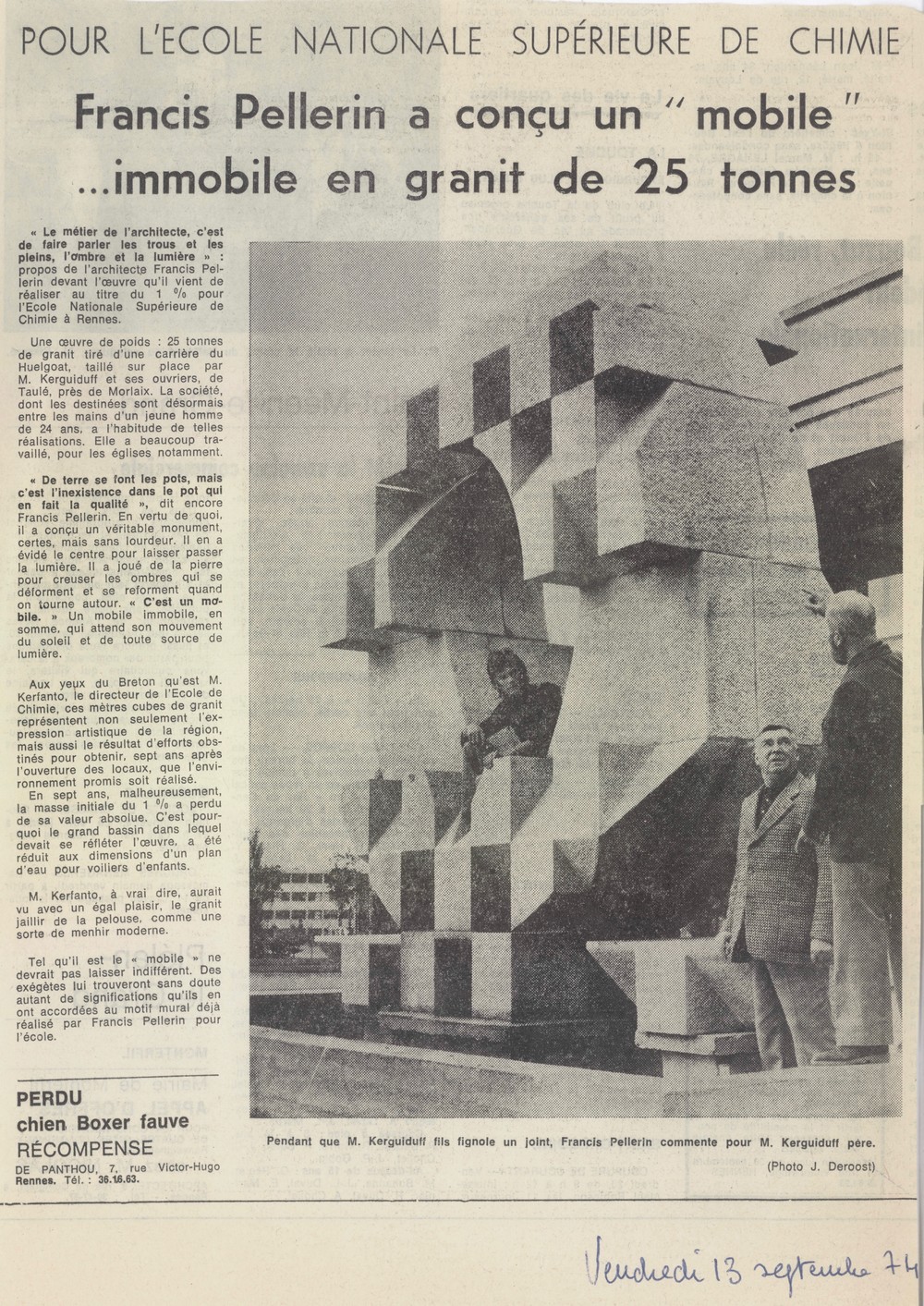 The stabile in the Le Pargo district of Vannes, at the Lycée Jean Guéhenno (a project by the architect Yves Guillou), rises to a height of 7 metres and was created in 1964. It is visible from the street: 79, avenue de la Marne. Francis Pellerin spoke about this monumental work of constructed art with passion.

In 1991, he wrote about it in the following terms:

The wind presented me with a contingent reality… a signal had to be erected under the premise that winds could reach 150 km/hour. My “unfolded structures” became “over-unfolded”, thus resolving an engineering problem. By “over-unfolding”, I made the forms transparent; emptiness and space came to me… until that point, I had expressed shape, space, movement, immobility… in emptiness, in absence, I encountered the presence of a STRENGTH that went as far as the adjustments I made.

Pellerin would go on to create a 7.57-metre high “signal” in Brest entitled Hymne à la Science, which can be seen from avenue Victor Le Gorgeu.

Article about the renovation of the stabile in La Liberté du Morbihan, 1993 © FP Collection/Archives de Rennes

The church of Saint Yves, rue de Nantes, Rennes was an architectural project completed by Yves Perrin. To visit the church, telephone the presbytery during office hours: Tuesday and Wednesday, 4.30 pm to 6.30 pm. Alternatively, come a short time before the Sunday service which starts at 10.30 am.

The church is significant on several levels:

Works began in March 1957 and the consecration ceremony led by Cardinal Roques was held in May 1958. Francis Pellerin’s contributions included a door in polychrome wood with a geometric abstract composition, a stained-glass window, a baptistry, an altar in slate, an altarpiece of Christ crucified in wood, and statues of the Virgin and Saint Yves. He also created an abstract Stations of the Cross in polychrome wood, and spoke of “ideograms that could benefit mediation”.

These ideograms aim to set something in motion within us. It is up to each of us to focus our attention, to use our imagination.

It was the first Stations of the Cross to include a fifteenth, depicting the Resurrection.

A reader of the Pauline Epistles, Pellerin quoted 1 Corinthians 15:14:

And if Christ be not risen, then is our preaching vain, and your faith is also vain.

It should be noted that the interior of the church of Saint Yves underwent certain modifications in 1994 and 1998. The side aisle was removed, with its altar, confessionals and glass panels designed to recede into the floor (an innovative form of partition for a service with a congregation of 100). A new altar was placed in the central nave. These changes slightly undermine the reading of the aesthetic coherence originally conceived by Perrin and Pellerin.

Stations of the Cross, Church of Saint Yves

Study for the door, Church of Saint Yves

Side aisle with confessionals, Church of Saint Yves

Tracing, Altarpiece, Christ on the cross, Church of Saint Yves

Altarpiece, Christ on the cross, Church of Saint Yves

Statue of the Virgin, Church of Saint Yves

La Boule, sculpture in the round, 1960, Faculté de Droit

Sculpture in the round, granite, 1967, Collège Rosa Parks (formerly Malifeu)

Monumental works outside Rennes, in Brittany and further afield

Sculpture in the round, granite, 1971, Lycée Technique Polyvalent, Decazeville, Aveyron

Sculpture in the round, 1973, Collège Beaufeuillage, Saint-Brieuc